VBT: In the Heat of the Tropics

In the Heat of the Tropics
by Christina Elliott


Amid a sweltering Miami summer, a serial killer is haunting the city. Reporter Ingrid Sorenson is assigned the story and her primary source is brusque detective Rick Gonzalez. The pair clash, but sparks of passion ignite. They risk their jobs to give in to their desire, but mistrust of each other’s career motives wedges them apart. Then Ingrid gets a tip that leads her into the killer’s lair. She and Rick must choose between saving themselves or rescuing their love.

The sky darkened again as if a dimmer switch had been thrown. Rick flicked on the headlights. “I don’t think we’re going to beat the rain,” he said. “Do you want to turn back?”

Worry crossed her face. “No way. I’ve got a deadline to meet,” she said. “I’m not afraid of getting wet.”

He gave her an assessing glance as they pulled up to a stop light. She was plucky, he had to give her that. And smart. The light changed and he turned his attention to the road. He had to keep his guard up. She was a reporter, first and foremost. He had to remember that.

“Have you found witnesses who might’ve seen a suspect?” she asked.

“I can’t discuss specifics of the investigation. The killer chose his times and locations very carefully, which suggests a lot of pre-meditation. These weren’t spontaneous homicides. He went to different areas known for prostitution pickups each time because johns would be scared to go to the place where one had just been murdered and the hookers would be on the alert, but they were all in this general North Miami area. He staked out lonely streets to direct the customer to drive to commit the sexual act and likely had his vehicle parked nearby to make a fast escape.”

Ingrid was avidly taking notes. He paused to wait for her to catch up, and wondered if he was saying too much. As long as he focused on details about the killer that someone would recognize, he couldn’t get in trouble.

By the time he pulled up to the scene of the third killing a mile away, fat plops of rain were sporadically splattering the windshield. They soon increased to a steady drumbeat battering the roof.

“There’s not much to see, honestly, just another side street.”

“I still think I should see the actual spot,” Ingrid said.

He would have to end up with a super-thorough reporter. “I have an umbrella here somewhere,” he muttered, foraging under the seat.

Holding the umbrella, he jogged to the passenger side and opened the door. Necessarily brushing shoulders to fit side-by-side under the small shelter, they walked down the street to an alcove of an abandoned building.

The sky cracked as if it were splitting apart, unleashing a torrent of water.

“I love these midsummer thunderstorms in Miami, don’t you?” Ingrid said.

Lightning illuminated her face with a bright halo.  Her cheeks shone where the rain had caught them, her forehead framed with tendrils of damp hair. Drops glistened on her eyelashes like tiny tears. He felt himself gliding toward her.

She blinked and the raindrops fell from her lashes. He halted himself.
“You’re getting wet. Let’s head to victim four,” he said brusquely. He turned toward the car without waiting for an answer.

The crime scene was a side street ten blocks west. This time they didn’t get out of the car. Rick pulled up and reconstructed the scene, restraining his urge to lean over her, just to breathe in her slightly sweet powdery scent, as he pointed from the window.

By the time they pulled back into the station parking lot, the rain had tapered to a dancing sprinkle and fingers of sunlight poked through the clouds, sending an eerie, hazy wash over the atmosphere.

He parked. Ingrid handed him her business card. “If you think of anything else, call me. My cell’s on there, too.”

Rick tucked it in a pocket. “So, what are you going to write?”

“What you told me, plus I’ll call some serial-killer psychology experts.”

“Just don’t get me in trouble again.”

Ingrid gave him a hard look. He’d meant it as a joke, but it hadn’t come out lightheartedly. She’d taken it as a rebuke. Damn.

“Thanks very much for your time, Detective.” Her tone was frosty. “If I have any other questions, I’ll call Major Montoya.”

The slam of the door buffeted the vehicle 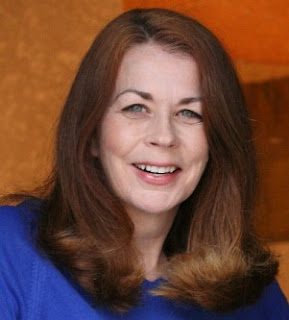 Christina Elliott is a former Miami newspaper reporter and editor. She now writes spicy romantic suspense novels from Los Angeles, where she’s glad to report there are far fewer bad-hair days but sadly far less Cuban coffee. She is a member of the Romance Writers of America.

* Did you use any of your own experience as inspiration?
In the Heat of the Tropics is based in Miami where I worked as a newspaper reporter. I made my heroine, Ingrid, a reporter. Police and journalists are always clashing on big stories—the reporters want more details, the police want to limit the details they give out. So there’s natural tension there. However, reporters and police both seek the truth. So there’s a natural commonality. I thought this would make the basis for a good romance-thriller.
* On average, how long does the writing process take?
Too long! It can take a couple years. I wish I could speed it up, but other pesky little things get in the way, like writing to pay bills, keep a roof over my head and eat! So it can be an on-off thing for a while depending on my work flow. Plus, I always like to leave a manuscript sit for a bit then come back to it with a fresh eye to see what needs fixing. I generally write too much, often jettisoning at least a book’s worth of writing to get to the story I want to tell. *  When did you realize you wanted a career in writing?

I’ve wanted to be a writer ever since I can remember. When I was about five-six years old, I won a little prize for “writing interesting stories.” I have no idea what I wrote at that early age, but obviously it impressed the teacher! But I’ve always been a voracious reader and that made me want to write books since I was little.
* If you weren't an author, what other career paths would you have taken?

I’d be a comedic actor. I took some acting classes and not only found them hugely therapeutic, but also discovered that I have a knack for comedy. I find being zany and way out. It’s really a huge release! It’s weird because I love reading, writing and watching drama, but when I act, it’s goofy comedy all the way!* Out of the characters that you created, who is your favorite?
In In the Heat of the Tropics, I actually really like the killer, Tucker. I gave him a compelling backstory about his mother not only to create some sympathy but also to fuel the motivation for his homicidal urge. I also like Rick’s story. His mother was a refugee from Cuba, who crossed the Florida Strait in a rickety boat when she was pregnant. After a storm destroyed the boat, she washed up on a Florida beach and gave birth with the aid of a policeman named Richard, and that’s who Rick was named after. I have fun creating backstories!* What advice would you give to someone looking to be a writer?

Don’t give up! Persevere in the face of rejection. Dig deep within yourself to find the wherewithal to keep going, and don’t listen to naysayers! Get used to criticism but surround yourself with positive, supportive people, and keep writing. The more you write, the better you will get.
* What kind of research (if any) was required for any of your books?
I love research. To me it’s one of the fun parts of writing novels.Since I worked as a print journalist, I had Ingrid’s character covered. I had to do more research on both serial killers and police procedures. Luckily, I’m fascinated by forensic psychology so over the years I’ve gathered a lot of general knowledge about people who are compelled to kill. I was able to draw on that to mould the character of Tucker. As for police, I covered plenty of cops, crime and courts stories over the course of my career. I’ve also dated two cops (!) and took a citizens police course that was offered by my local police department. I also lived in Miami for five years so I knew the area quite well.

*How long after you finish a book do you start another one?

I’ve got a number of unfinished projects stored in the proverbial desk drawer so I pull one of those out and see what I can do with it, usually quite quickly after completing a book. Finishing a book always brings on a strange feeling. I’ve usually worked on it for so long, I feel at a loss when it’s no longer part of my life. Plus, it’s going from the fun part—revising and polishing—back to the dreaded first draught stage again and I know all the hard work that lies ahead of me. Yuk!

The Giveaway
Christina Elliott will be awarding a $15 Amazon/BN GC to a randomly drawn winner via rafflecopter during the tour.