Set in New York City in 1976, Snakes Can't Run finds NYPD detective Robert Chow still haunted by the horrors of his past and relegated to tedious undercover work. When the bodies of two undocumented Chinese men are found under the Brooklyn Bridge underpass, Chow is drawn into the case. Most of the officers in his precinct are concerned with a terrorist group targeting the police, but Chow's investigation puts him on the trail of a ring of ruthless human smugglers who call themselves the snakeheads. As Chow gets closer to solving the murder, dangerous truths about his own family's past begin to emerge. Steeped in retro urban attitude, and ripe with commentary on minorities' roles in American society, this gritty procedural will appeal to fans of George Pelecanos and S.J. Rozan. 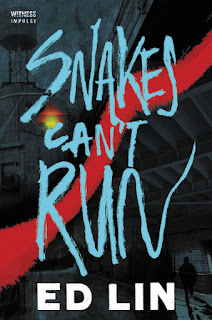 An Excerpt
The mind is a funny thing. After I got on the wagon and fell in love with a girl, I started seeing my father out in the streets. I didn't literally see his ghost walking around, but I'd see his nose in profile on another guy's face. Sometimes I'd be walking behind someone who had his slouchy shuffle, his spotted ears, or the back of the head that looked like an elderly porcupine with spikes gone soft and white.

One time, a hand reached out to my shoulder and touched me exactly where he used to touch me from his chair after dinner to ask me to get him a beer from the fridge.

Of course it wasn't my father. It was an older guy who wanted to know if I was the guy whose pictures used to be in all the Chinese newspapers. The man was almost completely bald and had two light brown spots on the top right of his head that looked like an imprint from a woman's high-heeled shoe.

He called me the Sheriff of Chinatown. I tried to get away from him as soon as possible, but he was one of those people who liked to say good-bye and then ask another question just when you're about to part. The guy ended up grabbing both of my hands twice before I was able to make the corner and get away. I checked that my wallet was still in my pocket, though, just in case he had been working me with a partner. I guess he was genuinely glad to meet me. 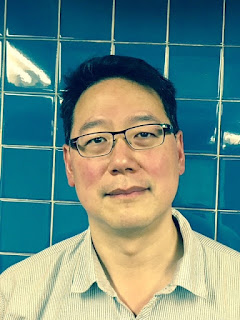 Ed Lin, a native New Yorker of Taiwanese and Chinese descent, is the first author to win three Asian American Literary Awards and is an all-around standup kinda guy. His books include Waylaid and This Is a Bust, both published by Kaya Press in 2002 and 2007, respectively. Snakes Can't Run and One Red Bastard, which both continue the story of Robert Chow set in This Is a Bust, were published by Minotaur Books. His latest book, Ghost Month, a Taipei-based mystery, was published by Soho Crime in July 2014. Lin lives in Brooklyn with his wife, actress Cindy Cheung, and son.

The Interview
Did you use any of your own experience as inspiration?
Definitely. I was born in New York City but we moved to Jersey when I still small. However, we did go into Chinatown pretty frequently for shopping and events. One time we went to a Buddhist funeral. There must’ve been 50 guests or so. We had a vegetarian meal but while I was eating, I found a bone. I showed it to a priest, who determined that it was a toothpick. This boy, said the priest, will be very lucky.

On average, how long does the writing process take?
Writing a book takes at least a year. I’m not able to work straight. Short stories sometimes intrude and I have to write them before I can get back on track. I’m also the father of a very active preschooler, so life is constantly crashing into me. Or is it the other way around?

When did you realize you wanted a career in writing?
I don’t know if I would call it a career. I feel incredibly compelled to write. It soothes the beast in me to do so. If I weren’t able to write, I would be a raving lunatic, unhappy in life because I never found the thing that I love to do.

If you weren’t an author, what other career paths would you have taken?
Well, I took a career/personality survey in high school that said I should be a minister or a college professor. Nothing else was close.

Out of the characters that you created, who is your favorite?
I know this is a copout, but I love them all, even the “bad” ones. I can’t choose among them because I see them as an ensemble cast to the story. Every one is essential.

What advice would you give to someone looking to be a writer?
Simply write. Yes, that sounds obvious, but so many people talk about it and then immediately cut themselves down by saying they don’t have the time. Make the time. Make the effort. Make the book. There is no excuse. If you want to write, then do it. Otherwise, you don’t really want to.

What kind of research (if any) was required for any of your books?
I restricted myself to media from the 1970s. You can’t trust what you read on the Internet, so I bought newspapers and magazines from that time on eBay. I watched shows and films from that time. Music, too. Stevie Wonder’s Innervisions is genius. I also interviewed two Chinese Americans who were cops in that era.

How long after you finish a book do you start another one?
I start writing the next book before I’m done. Right now I’m writing the third book in my Taipei mystery series with Soho Crime. It’s the sequel to Ghost Month and Incensed.